What are Sensis Condoms With QuikStrips?

The scene: you and a (very lucky fellow) are getting all hot and heavy. As one of you puts on the condom, it becomes pretty evident that it's gone on the wrong way.

Sometimes after such a mishap, the moment is lost—or worse: a couple tries to re-apply the condom by "flipping" it over. The latter is a big DON'T; use a new condom if this happens. 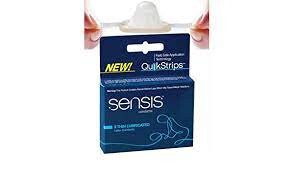 Happily, there's a new condom on the prophylactic block that's all about making sure condoms go on the correct way every time: Sensis Condoms with QuikStrips. The condoms are fitted with small pull down tabs with textured ridges to let you know which direction to roll the condom on.While holding the strips, you simply pull down and the condom unravels correctly every time. Because you feel the ridges, rather than look at them, you can apply the condom correctly even when the lights are out. The strips peel away from the condom—much like the strips on the back of an adhesive bandage—as it slides down the penis. 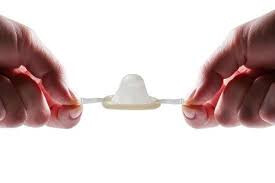